A state of the art appearance and balanced game play capacities, using our very own equipment. The arena is built symmetrically so no team has the advantage of a better side and game modes are more fair. 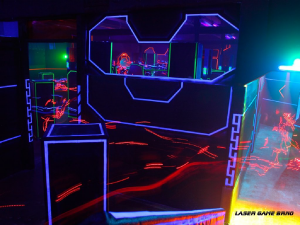 The tactical laser arena is a dark more than 370 sq meters sized battleground with two bases of the blue and the red team and a collision zone in the middle.

Up to 14 players can play the game at the same time.

It is built symmetrically in the style of 1st person action games like Unreal Tournament or Quake.

Thanks to that no team has an advantage on the start or during the game.

Arena is also set for the game mode Bases where one team tries to seize the enemy territory while holding its own.

Except of bases there are interactive elements in the game working in different game modes to maximize gaming experience.

There is a massive platform in the middle of the arena providing tactical advantage to a team able to seize it. Although some parts of it are made of Perspex and can the shot through.

In the corners on each side of the arena there are two other platforms covering a big territory and you can fire in more than 25 meters range.

There are two tunnels on sides, which can be used for sneaking over a long distance. But there is an energetic gate on both their ends killing people when active.