Elements in the action arena

Energetic heart of each team. They are situated symmetrically on both sides of the arena. Different functions.


Bases game mode – they are in the color of the team which hit them first and give the whole team points for every second of holding it. Two bases means two times higher points given.


Deathmatch and team deathmatch – when hitting gold central panel you get one of following bonuses for 30 seconds – resurrection after 2 seconds, faster shooting, shield for three hits 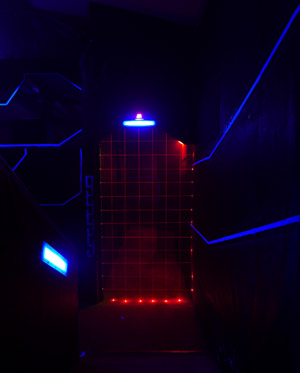 If the gate is closed by an energetic net, don't go through, it kills!

If the gate is green – you can go.

The gate is closing every 15 seconds.


The gate can be opened only from the outside. Open it by hitting a special sensor beneath it.


Zombie mode – dead zombie resurrects when it enters the gate.


Base mode – all players are resurrected under the gate. 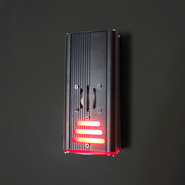 An equipment on sides of the arena giving extra 100 points when you hit it.


Ammo mode – you can get your ammo refilled here 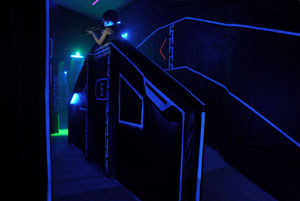 Each team has one platform in its area granting a wide range view, cover and a control of a large area. Beware, you can see each other from platforms, so you can kill your enemy from as far as 25 meters. 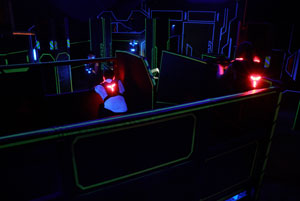 Central platforms and a tunnel:

In the centre of the arena there is a tunnel covered by two platforms. You can go on these platforms and cover the tunnel's entrance. You are covered by a special Perspex which hides your team identity.

In the middle there is a tunnel covered by three lightning cones. Beware, if red, they kill, if green, you can go. In various modes they have a different function (ammo refill, resurrecting…) 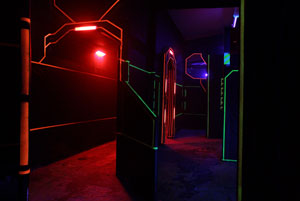 On sides of the arena there are two tunnels, which can be used for flanking the central collision zone. They have three entrances and can be closed by an energetic gate. Right from the tunnel you can also see a small platform of the enemy and you have a chance to neutralize enemy snipers.